The frequency with which units attack is measured in attack speed. A unit`s attack speed can be modified by items, agility Agility is the attribute that grants armor and attack speed. For each point of agility a hero gets: 0.14 (1/7) Armor 1 Attack speed Additionally, agility heroes also get 1 attack damage per agility point.

Every unit has a base attack time (BAT), which refers to the default interval between attacks for an unbuffed unit with 0 agility and no attack speed bonus. For instance, a melee lane creep has a BAT of 1.00 seconds, and thus attacks once every second by default. Similarly, if a hero with 1.7 BAT had 0 agility and no bonus attack speed, they would attack once every 1.70 seconds. While nearly every unit can have their attack speed modified, only a few heroes can actively change their BAT.

Every hero has a BAT of 1.7 except for the following:

increases IAS by 1. IAS is also modifiable by items, abilities, buffs, and debuffs. Attack speed works together with BAT to determine how often a unit can attack. 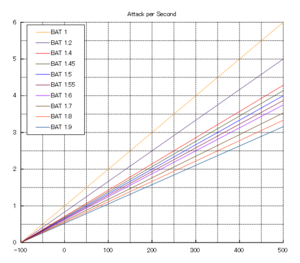 IAS vs BAT: attacks per second

The formulas below denote the relationship between BAT, IAS, attacks per second, and time between attacks.

Here are some attack speed benchmarks and their effect on attacks per second:

Using a hero`s BAT and IAS, their attack speed (length of time it takes to attack) is calculated using this formula:

In the formula above, the IAS after calculations, which is the final value BAT gets divided by, has a maximum of 6 and a minimum of 0.2. Any values exceeding the maximum or below the minimum are rounded to the nearest acceptable threshold. This means that any value above 6 would be lowered to 6 and any value less than 0.2 would be raised to 0.2.

Example using Windranger with no items at level 1:

In the example above it takes a cooldown of 1.28 seconds to attack.

Base attack time is the default cooldown for a hero`s attacks. Heroes with a lower BAT will attack faster than heroes with a higher BAT even when at equal IAS.

All heroes have a BAT of 1.7 seconds except for the following:

Heroes also have an attack duration which is labeled by two numbers. These are written as:

Windranger`s BAT acts as a cooldown, meaning she can only attack once per 1.5 seconds. If she has 0 IAS it would take 0.4 seconds to execute her attack, have a 0.3 second backswing, and then be able to attack again after the remaining 0.8 seconds. The backswing can be canceled, but that does not change her BAT cooldown. If her backswing animation were to be canceled immediately, she would take 0.4 seconds to execute an attack and then take 1.1 seconds of remaining wait time before her next attack. This practice is known as animation canceling and is extremely useful when chasing down other heroes. By canceling the backswing and performing other actions such as moving or spell casting during the BAT cooldown period, it allows the hero to act rather than standing still.

Like attack time, all heroes have a cast time. Cast times are static and cannot be changed. BAT does not apply to spell casting either. They are written as:

Some abilities have a reduced cast point, while others have a extended cast time or even 0 instant cast time. Animation canceling during the cast point will not release the spell or put it on cooldown.