IceFrog is the lead developer for both Dota 2 Dota 2 is an Action RTS game, developed by Valve Corporation. The title was formally announced on Oct. 13, 2010; and was released as a Free to Play game on Jul. 9th, 2013 for Windows, 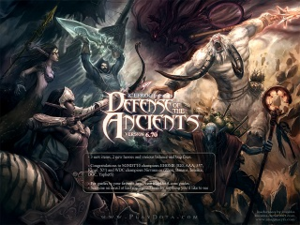 . To date, he has remained pseudonymous, and other than revealing that he was 25 years old in early 2009, characteristics such as his physical description and real name are unknown. IceFrog speaks English and Chinese, which he learned in order to better communicate with Dota`s large fanbase in China.

Various professional players and casters profess to have met IceFrog in person, but public details about these encounters are scarce out of respect for his privacy. Purge Play “They call me Tiny.” This article is a stub. As such, it is not complete. You can help Dota 2 Wiki by expanding it. Purge Background Information Name: Kevin Godec Date of birth: 17 Aug

remarked that he had met him before, but was unaware he was IceFrog; 2GD mentioned that IceFrog spoke quickly during their meeting. IceFrog is known to solicit balancing suggestions from professional players prior to a patch, though this is usually done over the internet.

According to his former co-developer Neichus, IceFrog had already had formal programming training by the time he became the curator of Defense of the Ancients.

Defense of the Ancients

IceFrog officially began his involvement with Defense of the Ancients in 2005, when he was recruited by Guinsoo Guinsoo may refer to: The previous DotA Allstars developer, Steve Feak An item , Scythe of Vyse Cosmetic item equipped by Nature s Prophet, Scythe of Vyse (Equipment) Play “One divided against its Self cannot stand.” This --the mod`s lead developer at the time--to assist with programming. Later that year, Guinsoo left the project and passed the lead developer position to Neichus, who continued to develop with IceFrog. Neichus` departure a short time later left IceFrog as the sole designer for the map. Since then, IceFrog has ushered in an era of competitive play by carefully balancing and renovating the game.

It is rumoredit has not yet been confirmed that at some point, IceFrog approached Blizzard Entertainment about the possibility of developing DotA as a standalone game, but the company was uninterested and asked him to port the mod to their upcoming StarCraft 2 map editor for free instead.

In 2009, a dispute arose between IceFrog and Pendragon, the maintainer of the de facto community hub DotA-Allstars.com. Pendragon, who had recently been hired by League of Legends developer Riot Games, was charged with using the site to promote his company`s upcoming product, while IceFrog was accused of developing the game Heroes of Newerth with S2 Games. DotA-Allstars.com was taken offline (along with all of its contents), and IceFrog and the rest of the community were forced to relocate to the newly-created PlayDotA.com.

Also in 2009, IceFrog was contacted by Valve This topic is covered better by other wikis or sites. Please see the following links instead: Valve Corporation on Wikipedia Valve on the Valve Developer Wiki Valve Corporation Company Year Founded Aug. 24, 1996 Management

, who had become interested in Defense of the Ancients and its future. After receiving a tour of their offices, IceFrog was hired and began work on Dota 2.

A persisting rumor is that IceFrog`s real name is "Abdul Ismail". In late 2010, an anonymous person posted a defamatory article called "The Truth About IceFrog: Behind the Bullshit", which has been termed "false" (unofficially) and "fake" by Valve representatives. A common theory is that it is pure libel, written by Pendragon after his falling out with IceFrog. One of IceFrog`s posts on PlayDota, which appeared before this incident, implies that IceFrog had no direct involvement with S2 Games.

Be that as it may, the name supposedly reappeared in the Dota section of Valve`s project management and bugtracking software, and was included in the Free to Play credits. It is unknown if it belongs to IceFrog or simply another Valve employee.

In 2016, The President and Co-founder of Riot Games, Riot Tryndamere, made a reddit post with a vague line reading "...hoping Abdul (IF) would eventually...", Suggesting that IF refers to IceFrog. The comment has since been deleted and Tryndamere refuses to comment on the matter.

In May 2017, a California court was discussing the ownership of Dota and they mentioned the name of IceFrog (Abdul Ismail), so it was confirmed by the California District court.

Defense of the Ancients

IceFrog`s involvement with the development of DotA began in 2005, when he was a member of the clan TDA. The lead developer at the time, Steve "Guinsoo" Feak, recruited IceFrog and Neichus with the programming aspect of the mod, as the complexity increased substantially. That year, Guinsoo handed development of the mod to Neichus, as he lost interest in continuing to support the map and sought time to play World of Warcraft. IceFrog worked as Neichus` assistant collaborator for a short period of time, until full control of the map was turned over to IceFrog. Since then, IceFrog has worked continuously to balance DotA and add new innovative features. What has been noted about the difference between Guinsoo and IceFrog is that while Guinsoo produced heroes at a rapid rate, IceFrog has been highly meticulous with the development process.

In 2009, IceFrog experienced a falling out with the administrator of DotA-Allstars.com, Steve "Pendragon" Mescon, who had become an executive employee of Riot Games, the developer of League of Legends. As such, IceFrog began servicing DotA and the community at PlayDotA.com. The exact reasons for this falling out are unclear, as there are conflicting stories. One is that Pendragon was using DotA-Allstars.com for personal gain by advertising League of Legends, while on his end of the story, IceFrog was working for S2 Games as a programmer on Heroes of Newerth. The latter of these claims were never formally verified.

In 2009, a group of employees from Valve Corporation became interested in playing DotA at a competitive level and while they ultimately failed at this, they became interested in the pseudonymous developer of the map. They spent some time corresponding with IceFrog, to learn what his plans and intentions were for the map. As his ideas involved porting the map to a stand-alone sequel, the Valve employees decided to pursue DotA as an asset they could support and IceFrog as a potential employee and lead designer. As such, Valve`s senior programmer, Adrian Finol, produced a proof of concept for the real-time strategy capabilities of the Source engine and presented it to Valve`s managing director, Gabe Newell, who came to support the idea.

IceFrog was brought to Valve`s headquarters in downtown Bellevue, where they showed him their office space and gained his interest and admiration. As such, IceFrog was hired on the spot and given the task of designing the sequel to DotA. With his involvement at Valve has come several notable developments to DotA, as the franchising name designated for it as a concept was changed to "Dota" with a lowercase "A". In 2010, Dota 2 was formally announced by Game Informer and ten months later, the game was shown for the first time.