Default buff icon
Play Error sound
Invulnerability is a status effect that renders the target completely immune to all status effects and damage, except for most damage flagged as @@@#@@@HP(hp.com)###@### Removal Damage is any means by which unit s current health can be reduced. Heroes, creeps, ancients, Roshan and fountains are all capable of dealing damage. Contents 1 Damage sources 1.1 Attack damage 1.2 Spell damage 2 . Most friendly effects, such as healing and teleports Teleportation is a form of movement in Dota that instantly moves a target from one point to another. The most common teleports are Blink Dagger s Blink and Town Portal Scroll s Teleport. Teleports can be distinguishing

, are unaffected by invulnerability.

Invulnerable units often cannot be targeted by attacks or abilities and will often have their health bar temporarily hidden.

Invulnerability itself is not granted explicitly by any effects or spells, it is instead granted as a secondary effect to other abilities. Consequently, invulnerability is often only granted for very short periods of time.

Invulnerability is not disjointing Shadow Fiend using a Blink Dagger to dodge Phantom Assassin s Stifling Dagger Disjointing is the act of dodging projectiles, or rather, to cause a projectile to fully lose track of its target. A disjoint is 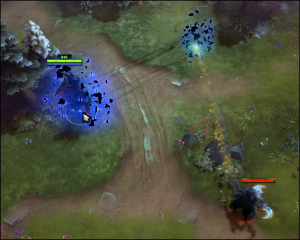 , although certain sources of invulnerabilities will also disjoint some projectiles.

Play⃂⃢₀ₜThey call me Tiny.⃢₀₝
This article is a stub. As such, it is not complete.
You can help Dota 2 Wiki by expanding it.

The following abilities can still work on most invulnerable units.