Play
Ability
Passive
Affects
Self
Roshan will block one targeted spell every 15 seconds.

Slow persists if debuff was placed before spell immunity and when not dispelled.
Modifiers

Roshan Slam: Dispellable with any dispel.

Strength of the Immortal

Because of the powerful items and gold received from killing Roshan, he is a large side objective. Many large fights may occur around his pit, and players may try to kill Roshan without being noticed.

Roshan`s location, circled on the minimap. 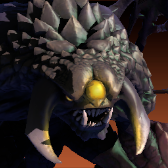 Roshan, sometimes also referred to as Roshan the Immortal, is the most powerful neutral creep Neutral creeps are a type of creep not controlled by any player. They are aligned to neither of the teams, and offer an alternative source of gold and experience. Neutral creeps appear in small camps

in Dota 2. It is the first unit which spawns, right as the match is loaded and is the only NPC which scales over time. During the early to mid game, he easily outmatches almost every hero in one-on-one combat. Very few heroes can take him on alone during the mid game. Even in the late game, lots of heroes struggle fighting him one on one, since Roshan grows stronger as time passes.
Roshan is not a creep which can just be farmed like the other neutral creep camps, fighting him is an important team decision, as it needs the correct timing and approach since it can decide the future of the match. Usually, it is fought as a team when it is safe to do so, meaning when the enemy team does not display a threat at the moment (for example after a successful team fight). 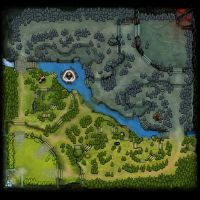 Roshan`s location on the minimap The minimap is a HUD element that represents the game map on a smaller scale. It displays in real time the location and status of buildings, heroes, creeps, couriers and wards. The minimap is subject 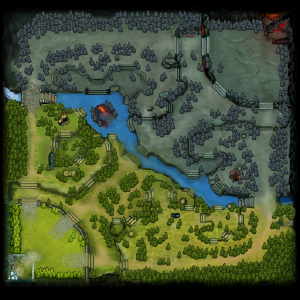 Roshan can be found inside his pit, which is located to the left of the top river rune spot. The pit is completely inside the river, with the river splitting up at its entrance and merging again right behind the pit. The entry of the pit faces south-east, towards the mid lane. The pit shell is U-shaped and has a length of about 1250 range and width of about 1050 range. The pathable area inside the pit has a length and width of about 750 to 550 range. Roshan can only be attacked from within that area, with the torches at the pit entry marking where it begins. Spells can target Roshan from anywhere and are not restricted like attacks. Roshan himself can also attack from anywhere, he does not have to be within his pit to attack. Roshan always stays at the end of the pit when not attacking and only attacks if enemy units come within 150 range of him, or damage him from within 1800 range.

Vision inside the pit

The only way to gain vision over the pit is to enter it. Units with ground vision Vision changes around while the hero moves. Vision describes what a unit can and cannot see from its current location and state. Places a unit cannot see are filled with the Fog of War, a

(this includes wards This page is about in-game units. For cosmetic pets, see Summoned Unit. Summons are a type of units that are created with spells. Players do not encounter them, unless they play as, with or against

and any spell) from outside cannot see into the pit, no matter how far their sight range goes or if they are on an elevated area like the ward spots. Observer Ward   Item   Changelogs     Observer WardB A form of half-sentient plant, often cultivated by apprentice wizards. Cost60 Bought FromConsumables Active Place Observer Ward Charges 1 Disassemble? No Alert allies? No Recipe Observer Ward

s cannot be placed inside the pit at all. Be that as it may, units with flying, or unobstructed vision Vision changes around while the hero moves. Vision describes what a unit can and cannot see from its current location and state. Places a unit cannot see are filled with the Fog of War, a

can see inside the pit from the outside.
So the only way to gain vision Vision changes around while the hero moves. Vision describes what a unit can and cannot see from its current location and state. Places a unit cannot see are filled with the Fog of War, a

inside the pit is to have an owned unit with ground vision in there (e.g. the hero itself, summoned units This page is about in-game units. For cosmetic pets, see Summoned Unit. Summons are a type of units that are created with spells. Players do not encounter them, unless they play as, with or against

or the hawks from Call of the Wild: Hawk) near the pit, or cast a flying vision providing spell like Illusory Orb, Static Remnant or Eyes In The Forest near the pit. Scan does not react on the presence of heroes inside the Roshan Pit.

When Roshan is slain, a global sound resembling its Play screaming, along with a special piece of Play music and an announcement from the announcer are played for all 10 players. Along with that, a screen message appears, announcing its death and which team killed it.

When Roshan is slain, he respawns after a random time between 8⃢₀ₓ11 minutes. Unlike with other neutral creeps, the respawn cannot be prevented by any means. The players do not get any indicator for when exactly he respawns, but spectators and casters can see a clock at Roshan`s spawn point, showing the exact time left for the respawn (not until 5 minutes after Roshan was slain).

Each player of the killing team is rewarded with 150 gold, and the hero who deals the killing blow gets an extra random bonus of 150⃢₀ₒ400 gold, effectively gaining 300⃢₀ₓ550 gold.

Upon Roshan`s second death and onwards, he also drops the Cheese, a completely shareable consumable item, which can be sold for 500 gold by the player who initially picks it up, or used to instantly restore 2500 health and 1500 mana. Just like the Aegis, the Cheese can also be picked up by anyone. Be that as it may, it is important to note that it can only be sold by the player who was first to pick it up. Therefore, if the Cheese is transferred from Player 1 to Player 2, only Player 1 can sell the Cheese.

Play“By the forge of creation.”
This section is under construction. It may still lack crucial information or contain unvalidated statements.
You can help by coordinating with the autors and offer your help.

Spells which cannot target or do not affect Roshan

Spells which behave differently on Roshan

Roshan is a powerful Neutral Creep located in a cavern in the middle of the north-west section of the river. He initially spawns at the very beginning of the game, and will respawn at a random time between 8 and 11 minutes after every death. You may only attack Roshan from inside his pit, although many spells can be cast from outside. If Roshan is ever brought outside of his pit, he will become invulnerable.

When killed, Roshan drops the Aegis of the Immortal; for his third and all subsequent deaths he will also drop Cheese. The hero who kills Roshan will receive a random bonus reward between 150 - 400 gold, and all five members of the team will receive 200 gold.

Aegis of the Immortal