Alexstrasza can be obtained through Classic The card set interface Card sets are categories into which collectible cards are divided, reflecting how they can be obtained, and determining whether they are eligible for use in Standard format. Card set does not

Though the battlecry in theory can do 15 damage to your opponent, it will rarely get the opportunity to do that due to its high cost. The battlecry can be used on either you or your opponent, so it can easily become the turning point for yourself if you are below 15, or if your opponent has taken very little damage by the time this card is played.

At the moment, a hero`s armor is counted as health. This has been confirmed to be a bug, and will be fixed in a later patch. 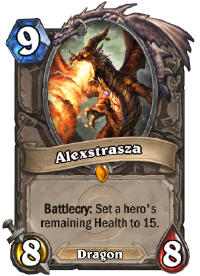 Alexstrasza the Life-Binder brings life and hope to everyone. Except Deathwing. And Malygos. And Nekros.

Alexstrasza is a legendary Rarity is a rough measure of the quality and scarcity of a card. Cards of higher rarity are typically more powerful and more useful, but are harder to find and more expensive to craft. There

As a legendary 8/8 dragon for 9 mana, Alexstrasza is already a big body to deal with in anybody`s deck, but her real power lies in her ability to set a hero`s remaining Health to 15. Due to the nature of this card, it can be used in a variety of ways as a great utility minion. You can play her if you are in need of a comeback and you are below 15 Health - which can be a very effective way to make your way back into a close game - or you can use it to advance your lead and force your opponent down to half life while playing a devastating minion.

Alexstrasza is a key component in many control decks A control deck, also known as a late game deck, is a deck that attempts to attain victory in the late game, through a combination of early game removal and Taunts, and powerful cards in . After spending the early game stalling, the player can use the dragon`s Battlecry to set the opponent`s Health to 15, effortlessly compensating for minimal damage-dealing in earlier rounds, then use burst Burst damage or burst potential refers to a player s ability to deal a large amount of damage in one or two turns, allowing a player to finish off a previously damaged opponent, or deal an damage to quickly defeat the weakened opponent. Warriors The  Warrior is one of the nine classes in Hearthstone: Heroes of Warcraft, represented by Garrosh Hellscream and Magni Bronzebeard. Contents 1 Heroes 2 Overview 3 Background 4 Hero Power 5 Strategy and gameplay 6

are one of the best examples of this type of play, focusing on removal and Armor generation for the first half of the game.

Alexstrasza`s Battlecry Battlecry is an ability where a particular effect activates when the card with the Battlecry is played directly from the hand. Although mostly limited to minions, some weapons also have Battlecries. Activation of Battlecries are :

Summon
I bring life and hope.

Attack
I will mourn your death.

I bring life and hope.
Summon

I will mourn your death.
Attack