Statistics for card packs are a means of observing the rarity drop rates for cards from card packs Card pack concept art Card packs are items that players can open to acquire cards for filling a player s collection. Only card packs for the current Standard format sets are available for purchase in the

, determining the opportunity cost of whether a player should continue to buy The Goblins vs Gnomes tab of the Cards pane The Adventure pane The Heroes pane The Shop is the in-game facility for purchasing new card packs and wings of adventures. Purchases may be made in 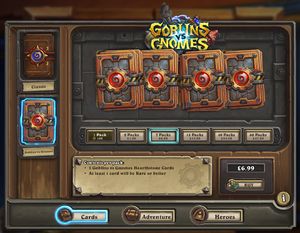 or not buy packs.

NB: For inclusion into this article, studies recording the rarity drops of card packs should have a reasonably large sample size and should have a citable reference from a reputable source.

There is strong evidence that a "Pity Timer" exists, which defines a maximum number of packs that a player opens before guaranteeing the next Rare/Epic/Legendary card. This Pity Timer counter is tracked individually for each store-bought expansion set, including Classic set The card set interface Card sets are categories into which collectible cards are divided, reflecting how they can be obtained, and determining whether they are eligible for use in Standard format. Card set does not

According to the below meta-study`s data tabulated under the "Golden cards" section, the average card pack has a disenchanting Crafting mode, in Standard format mode The crafting system is an element of Hearthstone that allows players to directly create new cards. It can be accessed through the My Collection screen. Crafting consumes Arcane Dust

value of 98.25 Arcane Dust Crafting mode, in Standard format mode The crafting system is an element of Hearthstone that allows players to directly create new cards. It can be accessed through the My Collection screen. Crafting consumes Arcane Dust

. Each card has an average disenchanting value of 19.65 Arcane Dust.

An in-depth statistical analysis of how much dust you can expect to get from a given pack opening is available here: https://www.reddit.com/r/hearthstone/comments/3bqvxx/have_you_ever_wondered_how_much_value_you_can_get/

The following numbers combine data from several other studies on this page. Since the numbers provided by each study are relatively similar, this is mostly for the convenience of a single overview of the statistics, as well as improved accuracy in the rarer cases. The original studies can be found in later sections.

Golden card data gathered prior to The Grand Tournament "From east to west, heroes are sent, seeking glory in the greatest of events... there are knights on noble steeds; those who will bring them to their knees; there are monsters to test their mettle

show significant differences from that gathered after. For this reason the below information is currently taken solely from the most recent study: HearthSim (Aug. 2015).

The following table describes the likelihood of getting at least 1 golden card in a given pack.

The following table describes the percentage of cards of each rarity which will be golden.

On Jun. 5th 2014 Steve Marinconz published the following results in an article on Kotaku.com. The data was collected by aggregating the results of numerous card pack opening videos found online, with a total of 1,000 packs. The study used only videos filmed in the last two months.

As well as the chance of each card being of a specific rarity, Marinconz also calculated the probability of finding at least one card of each rarity in any given card pack.

Based upon this data, Marinconz` provided some interesting `fun facts`. While these are based on the results of this single, relatively small study, the closeness of the study`s results to those of other and larger studies suggests that the below information should still be relatively accurate, at least for the lower rarities.

In Aug. 2014 E. R. Kjellgren published an investigation into the rarities of cards found in card packs. This was achieved by collecting user data from forums regarding the contents of 11,359 different card packs. The author notes that the investigation suffered from two main problems: the information collected was anonymous and its accuracy cannot be guaranteed; and the sample size, while adequate for the lower rarities, is still smaller than might be desired for the higher rarities. Kjellgren also divided rarities into golden and regular versions.

The data showed golden cards to be on average around 30 times less common than regular cards. Be that as it may, the proportion of golden and regular versions varied substantially by rarity. The author also notes that the sample sizes for the higher golden rarities are too small to be considered conclusive.