"Make a Standard deck to compete with the best! Stakes are high, the competition intense. More wins means more rewards. Can you make it to 12 wins, or will 3 losses end your run?" 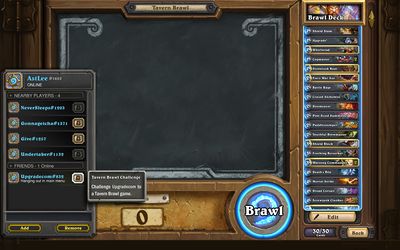 With no special rules involved, the best strategy for this Brawl will involve a combination of choosing a currently powerful deck, and in correctly anticipating the unique meta "The metagame is the mix of different decks that players bring onto the ladder, that you can expect to see. If you know what decks players are bringing, your deck can be especially good against of the Brawl. Note that while featuring an Arena-like run, the matches played will not follow the usual patterns of that game mode in that players will not be dealing with random decks or restricted choices; as a result it should match regular ladder play, although likely with a slightly different meta.

This Brawl was first previewed on Oct. 17, 2016, a month before it would eventually be released. The preview was met with considerable criticism, largely centred around the relatively low rewards offered in exchange for the high entry price, as well as from players preferring more casual Brawls.

It was initially stated that the Brawl would be released prior to BlizzCon 2016, indicating that it would run Nov. 2-7. Be that as it may, the Brawl was later postponed until Nov. 16-21, possibly due to the criticism its preview received. The Hearthstone panel at BlizzCon 2016 suggested that the developers might be adjusting the Brawl in response to the community`s feedback, but following the Brawl`s debut no changes appear to have been made.

On the second day of the Brawl, the previously stated limit of 5 runs per player was increased to 100 runs per player. Avarius stated that the initial cap was only temporary, to allow the devs to "keep an eye on the Brawl to ensure things were working properly for participants". The rules were also tweaked slightly, with draws, originally counting as a loss for both players, no longer counting as either wins or losses, and an early close to admissions was announced, in order to allow time for players to finish their runs before the Brawl closes.

This unique Tavern Brawl resembles an Arena run, and unlike other Brawls has an admission fee, which may be paid in gold or real money (see below). At the start of each run, players must first construct a special Standard format Standard format, or Standard, is one of Hearthstone s two game formats, the other being Wild format. Standard format is intended to featureSpecial attraction a fresher and more focused Hearthstone experience, with a limited pool of cards

, which will be used for all games in that run. The player is then matched against other Brawlers in a series of games until the player has lost 3 games or won 12 (draws count as neither), after which they will receive semi-random rewards based on their number of wins (see below). Each player can only participate in 100 runs in total. There are no special rules for this Brawl.

A high-risk, high-reward experience, this Brawl is intended for the most experienced and competitive of players, with a tournament feel. In contrast to most Brawls, Heroic Tavern Brawl is "definitely not for the average player".

Heroic Tavern Brawl is the first Brawl to have an admission fee, which may be paid in gold The gold counter, found in the bottom right corner of most menu screens Gold is a type of in-game currency that can be exchanged for card packs, or entry into either Arena or Heroic Tavern

or real money. The fee is charged for each run.

Due to the admission fee for purchasing each run, admissions for Heroic Tavern Brawl will close 8 hours before the Brawl in each region Hearthstone is divided into four geographical regions: Americas, Europe, Asia and China. Each country Hearthstone is available to play in is assigned to one of these regions. Each player by default uses their Battle.net account

, in order to give players time to complete their runs. The Brawl itself will close at the usual time, depending on region.

If the player has an unfinished run in progress when the Brawl ends, they will earn rewards equal to their current number of wins at that time.

The fee may be legendary, but so are the rewards

Meant for the "extremely competitive and experienced Hearthstone player", Heroic Brawl is a high-risk, high-reward experience, and the rewards on offer match the high price of admission, far exceeding those available through the Arena.

This Brawl offers four types of reward: card packs Card pack concept art Card packs are items that players can open to acquire cards for filling a player s collection. Only card packs for the current Standard format sets are available for purchase in the

, gold The gold counter, found in the bottom right corner of most menu screens Gold is a type of in-game currency that can be exchanged for card packs, or entry into either Arena or Heroic Tavern

, Arcane Dust Crafting mode, in Standard format mode The crafting system is an element of Hearthstone that allows players to directly create new cards. It can be accessed through the My Collection screen. Crafting consumes Arcane Dust

legendary Rarity is a rough measure of the quality and scarcity of a card. Cards of higher rarity are typically more powerful and more useful, but are harder to find and more expensive to craft. There

The following official chart shows the rewards granted by achieving each number of wins in a single run.

Following the announcement of this Brawl there have been various attempts to determine who should be participating in this Brawl. Even the most generous estimates suggest only highly-skilled players should consider spending the gold necessary to enter the Brawl, with some stating that only those able to regularly hit Legend rank should enter. The reason for this is the relatively small rewards on offer at lower win rates, with between 5 and 7 wins needed (depending on the estimate) to `break even` and recoup the entry fee.

It should also be noted that the Brawl is likely to attract a far higher calibre of player than the Arena, with the result that the competition will be far fiercer. Players can therefore expect a far lower winrate than they might normally enjoy. That said, while similar in format to Arena, the Brawl will offer an advantage to players who perform well on the Ranked ladder, as opposed to those skilled at Arena play.

As a result, the vast majority of players are advised not to participate in this Brawl, although they are encouraged to enjoy the spectacle through spectating players on their friends list, or watching streamers on Twitch.

Be that as it may, it is worth noting that the above estimates are based upon the likelihood of a profitable outcome, not the likelihood of having a fun, challenging and exciting experience. If the Brawl is entered into with the aim of enjoyment and competition rather than simply as a profit-seeking venture, it is up to the player to determine how much they are willing to spend to try a run.This Brawl represents a unique, time-limited opportunity to test your skills against the rest of the region. For some, this challenge will outweigh concerns over the cost of the experience, especially for a single run.