Ship`s Cannon is a Wild format Wild format or Wild is one of Hearthstone s two game formats, the other being Standard format. Wild format appears in game modes in which players are allowed to play decks without the deck restrictions of 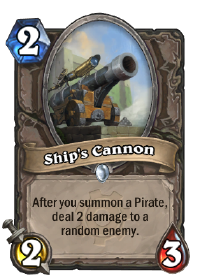 After you summon a Pirate, deal 2 damage to a random enemy.

If you hear someone yell, "Cannonball!" you`re about to get wet. Or crushed.

Ship`s Cannon is a common Rarity is a rough measure of the quality and scarcity of a card. Cards of higher rarity are typically more powerful and more useful, but are harder to find and more expensive to craft. There

This is a specifically Pirate Pirates are a type of minion. The majority of Pirate cards fit a weapon theme and are most useful in decks that featureSpecial attraction a lot of weapons. Pirates are associated with the rogue and warrior 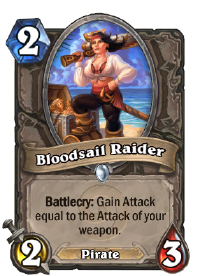 -oriented card. It works best when the player is able to summon several Pirates immediately after playing it, before the opponent has the chance to remove it.

The Ship`s Cannon can be useful for clearing the board of weaker minions, weakening stronger ones, or simply dealing additional damage to the opponent themselves.

When followed immediately by several cheaper Pirates, the Ship`s Cannon can serve as a soft taunt The shield-like Taunt visual effect Taunt is a minion ability which forces the opposing player to direct any melee attacks toward enemy targets with this ability. Minions with Taunt (commonly referred to as Taunts) serve

, forcing players without access to AoEs Area of effect (AoE) is the term for an effect which affects all characters of the specified type. Common targets for AoEs include all enemy minions, all minions, and all characters. AoE is defined in

to focus on removing this ongoing source of damage, thereby helping the player`s other minions to survive the turn. 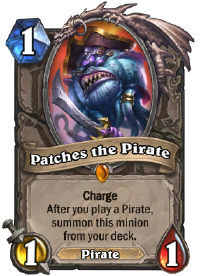 combined with Gang Up Gang Up Set: Blackrock Mountain Type: Spell Class: Rogue Rarity: Common Cost: 2 Abilities: Copy, Generate, Shuffle into deck Choose a minion. Shuffle 3 copies of it into your deck.If you are thinking about visiting 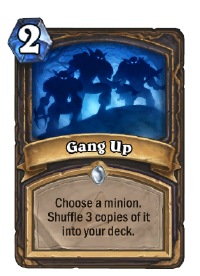 can make a surprisingly effective amount of burst damage.