This article is a stub.⃂You can help Overwatch Wiki by expanding it.

Emotes are short animations of each hero See playable characters. For the animated short, see Hero. All of the heroes, as of 2015 There are currently 24 playable hero characters in Overwatch. Each fits into one of four roles

that players can perform in-game. They are cosmetics Cosmetics are items in Overwatch which allow players to customize their heroes and profiles. They do not affect gameplay. There are currently eight types of cosmetics: Player Icons, Skins, Emotes, Sprays, Voice Lines, Victory Poses,

or by purchasing them with credits Credits are one of the currencies in Overwatch. They can be used to buy skins, sprays, voice lines, emotes, victory poses and highlight intros. They can be found in Loot Boxes either directly, as an 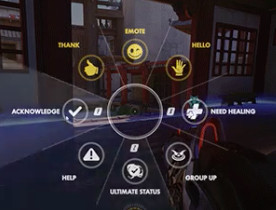 Each hero can be equipped with up to 4 different emotes at a time, and each character has 1 "Heroic" emote available by default. Additionally, all heroes have a sit emote, a laugh emote, and a dance emote from the Overwatch Anniversary The Overwatch Anniversary also known as Year One is an event in Overwatch. Its purpose is celebrating the game s first anniversary. The event began on May 23rd and is slated to end on Jun. 12th. event.

There are currently 157 non-default emotes in-game.

There are 36 emotes that can only be unlocked from seasonal loot boxes: